12:51 P.M - Tuesday 22nd February 2011
Another dull void. Then shaking.
My eyes flash open from daydreams, and my fingers wrap around the seat in front of me. The bus sways violently. My grip tightens as my mind tries to process what's happening. I am cast sideways by a wild and powerful force.
An ominous crack comes from outside, and my head turns to the window. They sky is grey. Trees are shaking, buildings are shaking; a woman struggles for balance on the footpath. On her face is pure horror, but I can't hear the screams from her mouth. A loud rumble dominates my hearing.
Then it hits me: an earthquake.
But as I realise what it is, the shaking stops. … Time stops. … Life stops. I can't know that these moments have been the last for probably hundreds. … The world pauses – the spinning of the Earth ceases for a second. An emptiness floods through the bus.
Suddenly we return from black and white. Hearts begin to beat again, faster than ever. Blood pumps. Lungs fill with air. On the bus, we all look around at each other, wide eyed and in disbelief. “That was huge,” says the girl across from me. I nod slowly, and more voices begin to fade in. “Short, but huge.” Everyone is texting or calling their family and friends. My phone was stolen recently, so I can only hope that everyone I know is alright. I simply stare out the window as the halted bus sets off again.
After a few hundred metres, I am perplexed.
“Did that just happen?” I ask the boy next to me, motioning to a fallen brick fence.
“I don't know,” he says. “It could have.”
I examine the damage. “I don't remember it being like that this morning.”
He shrugs, and I knit my brow in confusion. But soon, there can only be one answer. Shattered windows, broken pipes, cracked roads. This was worse than we had thought.
I hold my hand to my head as I see everything we had restored and repaired over the last five months destroyed. Silt is flooded through homes and gardens. An elderly woman observes the scene from her deck with dread. Another woman is crying on the phone, standing on several inches of sand and water, still in her dressing gown.
A feeling of disgust sweeps through me. This isn't possible. This can't be happening. Christchurch has beaten earthquakes. We've made it through. But somehow, I know in my heart and mind that it is happening. I don't know how, but old wounds have been reopened, and a devastating past has come back to haunt us.
And as I get off the bus near my house, a million thoughts are running through my head. I look up in desperation, but the sky is still overcast. There will be no starry night tonight, no enchanting panorama and no comfort from the heavens.
But then, in a single moment, I catch a glimpse of sunlight through the clouds.
There is hope.
Posted by Nick at 9:28 PM 2 comments:

4:36 A.M - Saturday 4th September 2010
My eyes flashed open and I embraced the dull void of the night. For several moments, awareness struggled to seep into my mind, and I lay still in my bed. A strange feeling of emptiness seemed to fill the house. Then suddenly, I realised what was occurring.
The house was shaking. A violent wind rocked it from side to side – only, after another handful of seconds, when the shaking did not stop, I realised it wasn't the wind.
It was an earthquake.
*     *     *
That was over five months ago. That piece there is an excerpt from something I wrote which was published in The Press, the main newspaper of Christchurch.
The September 4th Earthquake was 7.1 on the Richter Scale, and sent my city into survival mode. It was devastating, traumatising, and uncontrollably powerful; for those who have never experienced an earthquake, there really aren't any words to describe it. But when you feel it, you know immediately that you are small and helpless, and that the force of nature is wild and mighty.
The streets cracked:

Buildings were torn down: 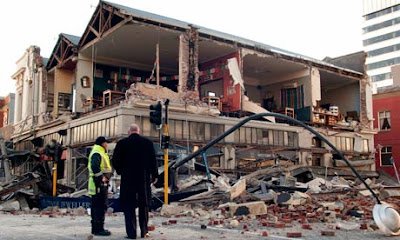 And silt flooded up to the surface. It was a miracle that no-one was killed.
But Mother Nature wasn't done yet. Just when we thought it was all over, that the aftershocks were beginning to die away for good, the worst happened.
On Tuesday, 22 February 2011, we had another BIG ONE.
At 6.3 on the Richter Scale, it doesn't seem as big, but it was shallower and closer to Christchurch, and during the day. That's a deadly combination: the death toll is at 103, and rising.
This really is much worse than last September.
*     *     *
I was on the bus at 12:51 P.M. School had finished early due to a Teachers' Union meeting. Little did I know that old wounds were about to be reopened, lives claimed, and the city badly damaged.
Then it hit.
Long story short, I got home, having realised that this wasn't just another mundane aftershock. I was freaking out. I was dreading the future. I had no idea how we would get through this time. We were in survival mode again. No power, no water, no sewerage, nothing. And the house was an absolute mess.
The kitchen: 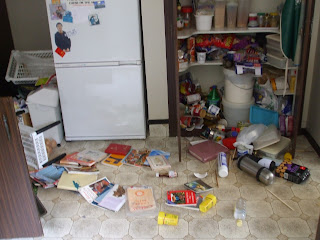 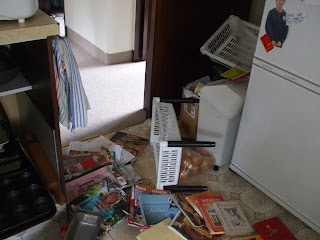 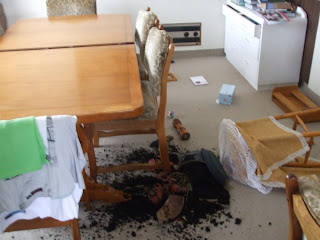 The bookshelf (this is also the entrances to my bedroom and my brother's, which are identical): 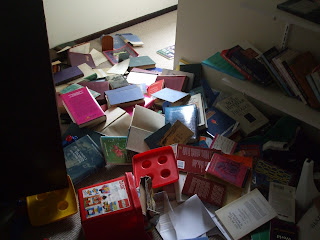 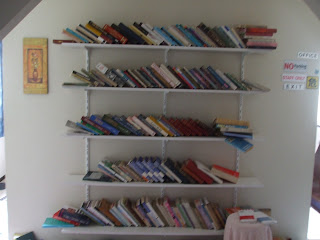 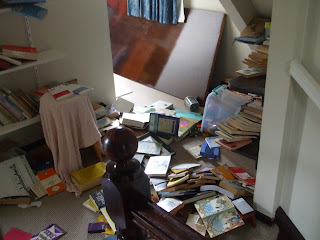 Then the lounge. Before I show you the picture, there's a story behind this one that I need to tell you. In the midst of darkness and destruction and devastation, there was one funny thing.
Twenty years ago when my parents got married, they were given a beautiful blue vase. Mum never got it out until two years ago, because she was afraid that with three boys (playfights, playing cricket inside, etc) it would never survive. So she put the vase on top of the big TV cabinet next to the radio speakers.
When the 4 September Earthquake struck, the speakers fell off, DVDs tumbled from their places, and it was a mess.
But the blue vase survived. Somehow.
There it was, just sitting there. Sitting there, still on the cabinet.
When Tuesday's earthquake hit, I came home to the strangest sight. The cabinet was on a lean, kept upright only by the cords from the DVD and video players that were plugged into the wall. The speakers were down and the TV had face-planted. Guess what happened to the vase. 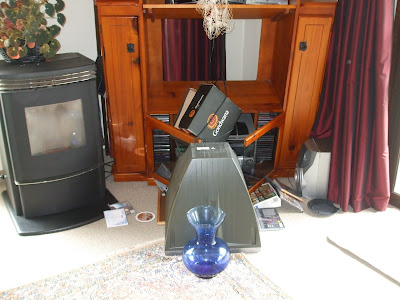 As most of you will know, Valentine's Day was on Monday. And to celebrate the occasion, I thought I'd tell a story. It goes a little like this:

When I was only three and in kindergarten, I fell head-over-heels for this girl. I don't even remember her name (I'll just call her Jess), but she was the prettiest girl my young eyes had ever seen. So, one day at kindergarten, my buddies and I were just chilling and doing nothing much, drawing pictures or playing in the sandpit or doing whatever it is that three-year-olds do.

Then Jess came up to me and asked if I wanted to play with her. Here was me at this point: 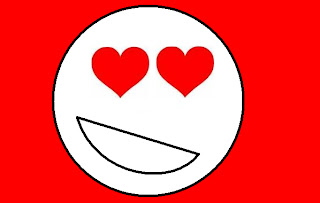 I had played with her before, but this time it would be different. Being the intelligent little guy that I was, I had a plan.

The game we were going to play was one that involved her being my mum (if I remember correctly). And so while she went outside with the others, I rushed to the nearest table, grabbed some paper and a crayon and wrote "I love you Mum". Subtle and smooth - it was genius. (Don't ask me how I knew how to write that as a three-year-old.)

So, I went to join the others. After a while, I slipped my note to Jess. I expected her to smile, or at least say thanks or something.

Jess took one look at it, scowled, screwed it up and threw it to the ground. You can guess what I did. 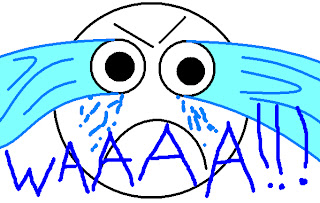 And yes, I cried with my eyes open. And so, in my hour of darkness, when all seemed lost and I was crying my head off in front of Jess, I flung my arms around my kindergarten teacher and uttered my famous three-year-old line (and I'll end with this, because it is so intensely insightful that you will probably burst into flames):

"A girl's brain goes round and round and doesn't know what it's doing." Wow. SO INTENSE.
Posted by Nick at 6:26 PM No comments:

Hey! Ok, so my first post was going to be kind of an introduction to me, but I figured that you probably already know me. If you don't, my name is Nick. I am fourteen, I'm a writer and I'm a Christian. Anyway.

Instead of talking about me all day, I thought I'd discuss something a little more interesting.

I write poems, and the other day my dad mentioned that my poems seemed like they were written by someone a lot older than myself, because they reflected on life freakishly well. So, while in real life I am like this: 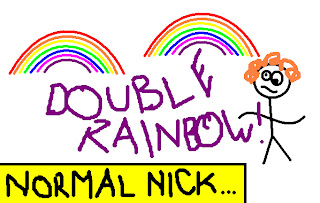 Apparently, in my poems, I am more like this: 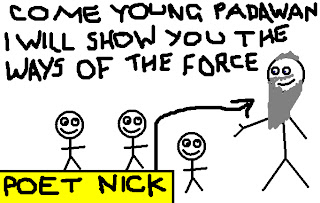 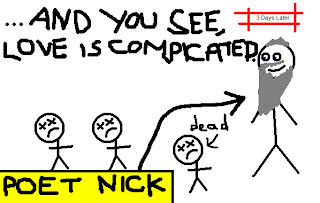 And I'm also wordy. Really wordy. I use long words, short words, exquisite words, and I screw around with the English word order.

And I love it. It's great fun.

I don't care that people that some people critise or call me sensationalist. I don't even care that they get the lines and words wrong when they critise. Because you know what those people look like to me? Like this: 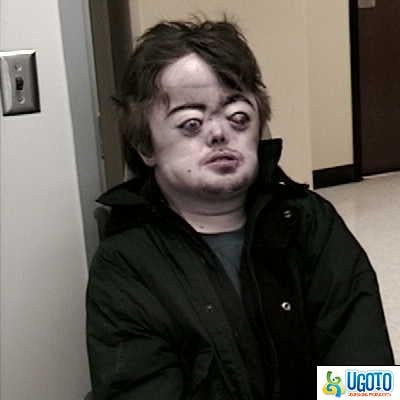 However, since it doesn't happen that much anymore, I shall forgive and forget. Because at the end of the days, kiddies, forgiveness is what it's all about. It's one of the strongest character traits in the world.
Should I write a poem on that?
Posted by Nick at 8:01 PM 4 comments:

My First Ever Interview!